One might expect the NYS Department of Transportation to maintain New York State Bike Route 9, a.k.a. NYS Rt 376 from Poughkeepsie to Red Oaks Mill, in a bicycle-aware manner.

One would be mistaken.

The most recent patch strip very carefully avoids the deteriorated shoulder, all the way around the curve: 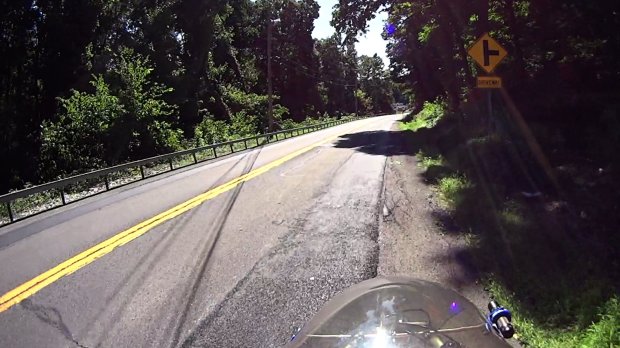 The weeds growing in the serrated shoulder add a decorative counterpoint to the black asphalt patch in the travel lane: 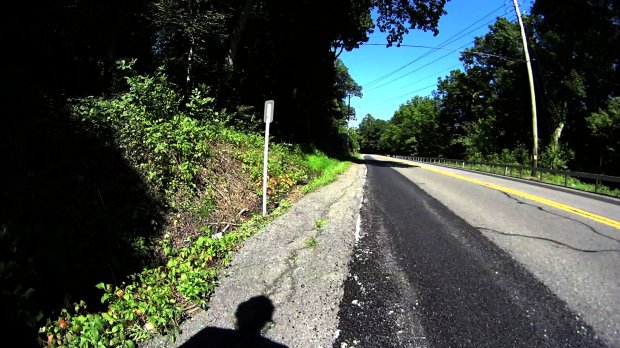 It was a rather large repair crew:

The crew chief said they were there because “somebody wrote a letter” describing the conditions. I suppose that would be me, although after half a year it’s hard to establish causation, let alone correlation.

He also says no details of the letter reached him, which explains why they laid the patches in the travel lane, rather than repairing the conditions I described. He was adamant they were doing the best they could with the inadequate manpower, materials, and time available for the projects.

There are absolutely no requirements to consider bicyclist safety in their repairs, so laying asphalt over the shoulder never happens.

NYS DOT’s Bicycling FAQ says I should “take the lane” around that curve, due to the deteriorated shoulder, to ensure motorists pass only when it’s safe.

Whenever I offer to take a NYS DOT bureaucrat on an inspection ride along their roads, they never have the time. Of course, they don’t “work” on weekends, so they’re unwilling to join me on a pleasant ride around the area some Saturday or Sunday morning.

Just another day of bicycling along NYS DOT’s “complete streets” …

That’s a 0.035 inch = 35 mil hex wrench, of which Eks reminds me “Any time your design requires a tiny [obscene gerund] wrench, you’re doing it wrong”.

Posted by Ed in Electronics Workbench, Oddities, Software on 2018-08-29

Actually measuring the SCL frequencies suggests something else is going on: 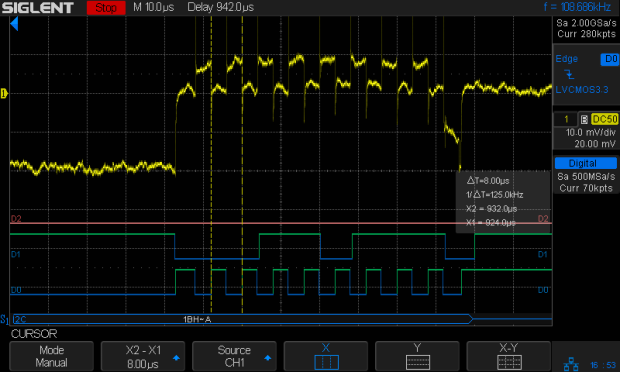 D0, the bottom trace, is SCL, D1 is SDA, and D2 is a trigger output not used in this setup. The yellow analog trace is the current in the SCL line between the Pi and the BNO055, about which more later.

The BNO055 pulls the clock low (“clock stretching”), which can (and does) cause problems, but it’s not active during the main part of the transfer where the Pi determines the SCL frequency.

More measurement along those lines produces a table:

Apparently, the code converting the nominal I2C rate in config.txt uses a table of divider values intended for another CPU core clock. AFAICT, the boot code could divide the actual core clock by the desired I2C frequency to produce the appropriate value.

[Update: Perhaps this comes along with CPU clock throttling due to temperature. For completeness, I should dump the temperature and actual clock speed.]

Gulfstream V on Final to KPOU

This corner on Maloney Rd is almost exactly one mile from the end of Hudson Valley Regional Airport Runway 24: 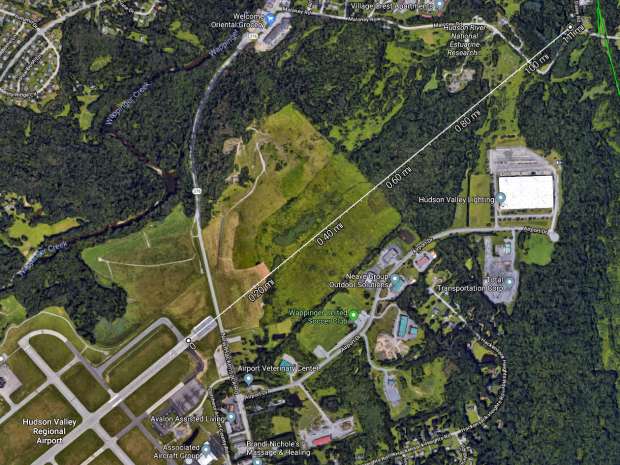 So it’s not unusual to ride under a small plane on final approach. Having a Gulfstream V fly directly overhead, however, is a real attention-getter:

What’s not at all obvious from the picture is how big a GV looks when seen directly overhead through those trees just ahead on the corner where our paths crossed. There’s a 360 ft (above sea level) hill directly on the flight path, so it’s at maybe 600 ft ASL and 400-ish ft AGL.

Thrust-reversal thunder rolled over us 50 seconds later, as we rode up the rail trail access ramp. Figuring we’re 15 sound-seconds from the strip, the GV was 30 seconds from touchdown.

A wind gust pushed Mary’s bike over with the daytime running light on the downward side:

Frankly, it’s better to have a cheap and easily replaceable plastic widget break, instead of something expensive and hard to find.

Because we live in the future, a replacement part was just a few hours away:

Well, a few hours after installing a replacement thermistor and recalibrating the M2, but nested repairs happen every now and again.

One of the two air pockets in the token padding had popped:

Fortunately, they were plastic bottles with rugged contents, so I suppose the packaging was up to the task.

Of course, you need a special tool to remove the main cap, after which some internal lockwork releases the side caps, after which you can spin the valve stem recessed under the top cover. One hopes all those little bits continue sliding and releasing after a few decades, but … the status quo apparently isn’t all that good, either.

The Smell of Molten Projects in the Morning
Powered by WordPress.com.