All of the local turkeys come together during snow storms, often lingering in the circle of pine trees in our back yard to get some protection from the wind. Mary spotted a Cooper’s Hawk in the midst of the turkey flock, with its wings spread around a recently captured meal:

When she first saw it, the hawk had its back to us and looked like a cluster of dead pine branches; the recent back-to-back storms have cleared out quite a bit of deadwood.

When I quietly opened the back door for a better view, the hawk noticed and gave me the stinkeye from 100 feet away:

The flock had moved out of the pine circle to surround the hawk and examine the situation, although they weren’t harassing it: 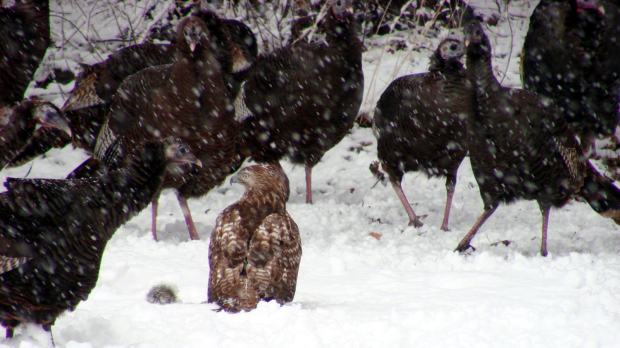 We’ve counted 27 turkeys, more or less, on some days, well and truly outnumbering the hawk:

Fortunately, turkeys feed mainly on insects and seeds, rather than tearing into carrion, so they’re not competing for the prize:

Shortly after I gave up and went back inside, the hawk sank her (?) talons into the squirrel, lifted heavily into the air, circled around the pines, and flew off toward the Mighty Wappinger Creek out back.

A casual search suggests both the hawk and the squirrel weigh about 1 lb = 500 g: I’ll never complain about heavy grocery bags again!

This entry was posted on 2018-04-01, 07:42 and is filed under Photography & Images, Science. You can follow any responses to this entry through RSS 2.0. Both comments and pings are currently closed.