A high energy collision / accident / mishap in front of Adams Fairacre Farms (a.k.a., the grocery store) demolished 20 feet of their dry laid stone wall along Rt 44, flattened several bushes, gouged trenches in the grass, and scattered plastic debris into the parking lot. The remains of a headlight eyebrow running light emerged from a snow pile:

Contrary to what I expected, it has one white LED at each end of the chromed reflecting channel, topped with a shaped plastic lens collecting the light: 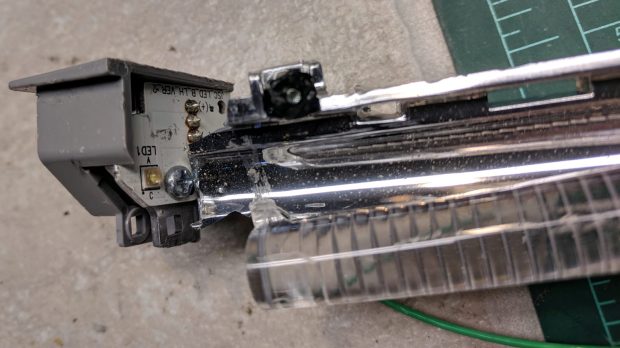 The LED PCBs are in series, which produced a backwards wire color code on one end:

The other end looked more reasonable: 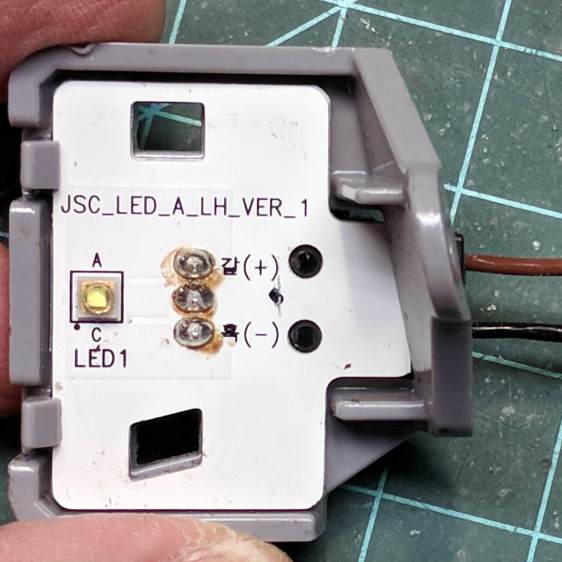 The white SMD LEDs draw 300+ mA at 3.6 V, so they’re obviously depending on external current limiting provided by the regulator PCB, sporting a TLE4242 linear current regulator and a handful of passives:

AFAICT, they didn’t use the chip’s PWM control input or its LED failure status output.

Extracting the various PCBs from the wreckage and reconnecting the wires produced a satisfactory result:

Dunno what I’ll use this junk for, but at least I know a bit more about eyebrow lights. The chip date codes suggest 2010 and 2012; perhaps linear regulators have become passe by now.

This entry was posted on 2018-01-09, 07:01 and is filed under Electronics Workbench, Oddities, Recumbent Bicycling. You can follow any responses to this entry through RSS 2.0. Both comments and pings are currently closed.