With the WS2812 test fixture neatly mounted, I plugged it into a six-port USB charger allegedly capable of supplying 2.4 A per port and captured a trace with nearly all 28 LEDs displaying full white: 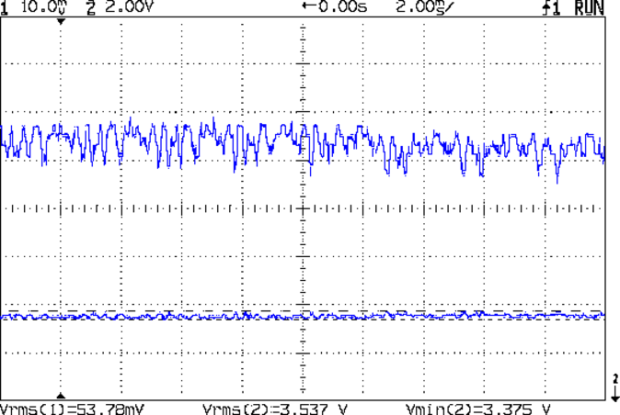 Also, the supply voltage (measured across the LED array “bus bar” wires) hits 3.37 V, well under the 5 V you’d expect from a USB charger and less than the 3.5 V called for by the WS2812 specs. Although the WS2812 nominally limits the LED current, there’s no telling how it varies with supply voltage.

That’s with an additional 20 µF of tantalum capacitance across the power bus bars. The peak current looks like 1.4 A, with marginally more supply voltage at 3.56 V.

Bumping the trace speed shows the wall wart produces nasty current spikes, at what must be the poor thing’s switching speed, as it desperately tries to produce enough juice for the LEDs:

The step over on the right looks like a single RGB LED going dark, as it’s about 50 mA tall.

The output voltage doesn’t show the same spikes, so the LED array acts like a constant-voltage load. Given that the WS2812 probably connects all the LEDs pretty much straight across the supply, that’s not far from the truth: we’re looking at the forward drop of those blue LEDs.

Now, to let it cook away in the cool and the dark of the Basement Laboratory…

This entry was posted on 2017-02-25, 07:48 and is filed under Electronics Workbench. You can follow any responses to this entry through RSS 2.0. Both comments and pings are currently closed.