GPS Position Jitter: Into the Drink!

We spent the night aboard BB62 in Camden NJ, with our bikes lashed to a post on the dock. Follow the light-color brick track from the upper-left GPS point across the dock to the black dot marking a memorial stone: we tied up just to the left of that spot. 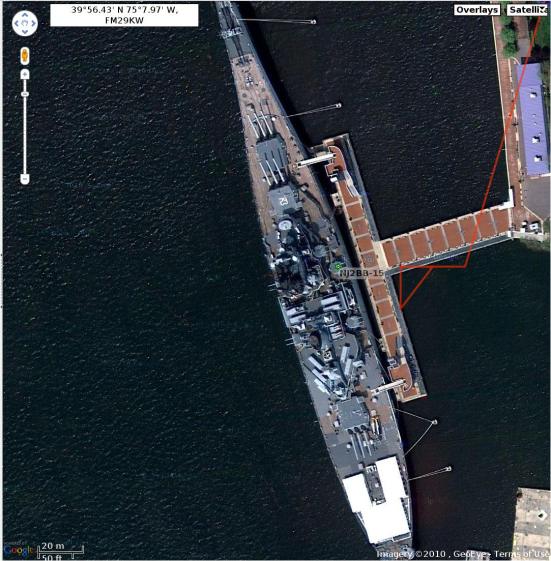 NJ2BB-15 is the APRS digipeater aboard BB62 with an antenna high in the superstructure. While I didn’t have any trouble with RF reception, packet collisions pose a problem in a dense urban environment. For what it’s worth, essentially everything in the superstructure is an antenna; the NJ2BB ham shack is a wonder to behold. 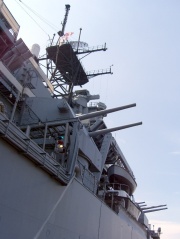 The point-to-point jitter is about 20 meters (18.52, says the GPS info dump), so you’re looking at the un-augmented GPS accuracy of a long-term stationary object. I’m sure there’s a slight registration mismatch between the satellite imagery coordinates and the GPS coordinates, enough to put the upper-left point across the dock.

If you get the chance, take the tour. The guides are retired Navy, some served aboard BB62, and they take their storytelling duties very seriously. The bunk space, even with air conditioning, is claustrophobic at best; a tip of the bike helmet to you folks who live in these machines!

[Update: Our daughter discovered three itchy bites in a line across her tummy the morning after spending a night in the bunks. That means BB62 has bedbugs, which you do not want to bring home in your luggage. As a result, I cannot recommend an overnight on BB62, alas. We wish she’d mentioned that before we got home…]

[Further update: when I reported this to the folks at BB62, they had an exterminator check out the berthing spaces and conclude they have no bedbugs on board. That’s encouraging, but I still heartily recommend that you follow the same decontamination procedures that you should use after all trips.]

It turned out one rider in our group was an active-duty Rear Admiral who, evidently, could (or should) have supervised the signal gun firing after Colors and Taps. She was traveling incognito, though, and didn’t stand on ceremony.

This entry was posted on 2010-08-15, 07:11 and is filed under Amateur Radio, Recumbent Bicycling. You can follow any responses to this entry through RSS 2.0. Both comments and pings are currently closed.