After putting Mary’s newly covered seat on her Tour Easy, I replaced the tire liner in the front wheel; the previous tube had gone flat, as mentioned there, due to erosion from the end of the liner.

Here’s what the taped liner looked like: smashed as flat as you’d expect from 100 psi applied evenly over the surface. The tube had a rectangular imprint on it, with what looked like minute abrasions, around the outline of the tape. Nothing major, but it shouldn’t ought to look that way.

I rolled that liner up, popped it in the Bike Tire Stuff drawer and replaced it with a Slime liner. This picture shows the ends of the two liners: the brown one (bottom) is about 90 mils thick in the center, the Slime liner (top, fluorescent green) is 60-ish. 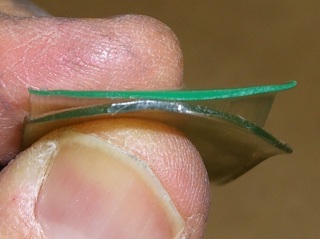 As nearly as I can tell, I’ve never had an abrasion flat with a Slime liner, while various other brands have caused troubles.

I broke the edges of the Slime liner with a bit of sandpaper, just to see what that’ll do. Most likely, bad things, seeing as how I’ve never done that before…

This entry was posted on 2010-02-24, 07:37 and is filed under Machine Shop, Recumbent Bicycling. You can follow any responses to this entry through RSS 2.0. Both comments and pings are currently closed.