From a datalogger hanging on a string in the well pit, about three feet underground, in December: 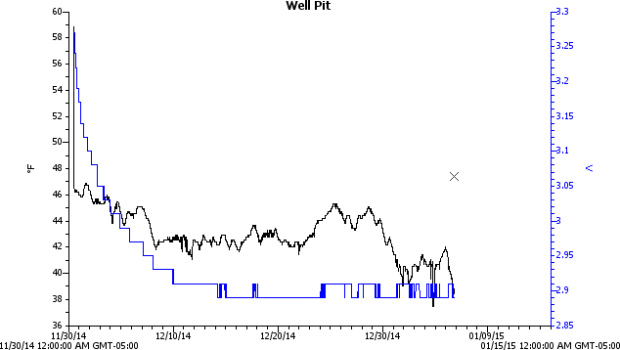 The temperatures continue downward in January:

Evidently, the new Maxell CR2032 lithium cells don’t do well in extreme cold. They’re rated to -20 °C = -4 °F, but that spec applies for a very low load that surely doesn’t include blinking a red LED.

I’ll take a look at that logger in a few days, then hack a pair of AA cells on the back if it’s dead again. Alkaline cells aren’t very good in cold weather, either, but they may have a better minimum voltage.

Or it’s just another batch of dud CR2032 cells…

This entry was posted on 2015-02-01, 07:23 and is filed under Electronics Workbench, Science. You can follow any responses to this entry through RSS 2.0. Both comments and pings are currently closed.