Our travels took us past a mall, in which I discovered another generation of waterless urinals. The general notion is that the cartridge contains a light oil that allows urine through to the drain, while blocking sewer gases just like an ordinary pipe trap.

These Falcon urinals smell not at all like the Eau de Outhouse I found in Boston’s Hynes Convention Center some years ago; I suppose there was some pushback from the end-user community…

IIRC, the Hynes restroom retrofit installed waterless drain cartridges in a standard urinal. Unfortunately, with no flush water to rinse the bowl, the urine simply dried in place with exactly the olfactory effect you’d expect.

This urinal is obviously a custom-designed hunk of ceramic technology and, according to their copious literature, whizz just slides right off and runs through the Sloan cartridges on its way to the drain. I’m not sure how all that works, but things have certainly improved… or, perhaps, the mall does maintenance much more frequently than Hynes. 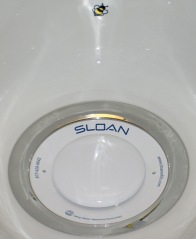 Anyhow, that small dot a few inches above the cartridge seems like an aiming target. Speaking strictly as an amateur apiarist, the notion of “pee on the bee” isn’t all that attractive, but I suppose they needed some way to direct the stream away from the inlets …

This entry was posted on 2010-01-05, 07:42 and is filed under Home Ec, Oddities. You can follow any responses to this entry through RSS 2.0. Both comments and pings are currently closed.