Backstory: we get Kirkland almond butter from Amazon, because it has consistently good quality at a reasonable price. Kirkland being the Costco house brand, we’re obviously buying it from someone arbitraging the Costco price. The nearest Costco is over an hour away, so spending $60 for a membership (*) just to get almond butter doesn’t make sense.

However, I’ve discovered Amazon’s “buy it again” prompting generally doesn’t offer the best deal, so I start each purchase cycle with a general search. The current results proved interesting (clicky for more dots):

Let’s go through this slowly. 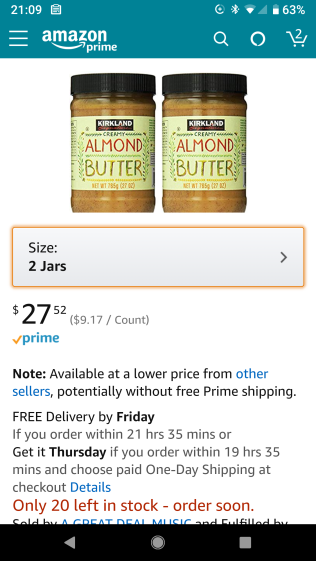 The “Amazon’s Choice” result simply means a bunch of people bought from that listing, not that Amazon has an actual involvement apart from raking in their take. There’s no unit pricing, but each jar works out to $13.59.

The last result confirms Amazon’s unit pricing bogosity by (correctly!) dividing $26.23 by two, but then claiming the unit price is “per ounce”.

Weirdly, everybody selling the two-pack prices it that way:

We’re surely not looking at half a dozen heads of the same hydra, so this bogosity derives from the commingled UPC (ASIN, whatever) warehouse stock technique giving Amazon a way to avoid responsibility for counterfeits. Somebody (presumably at Amazon) selected the calculation to produce the unit price, but fat-fingered “per ounce” rather than “per each”, and now vendors just bid for that UPC without sweating the details.

You’d (well, I’d) think a bit of Amazon’s much-vaunted machine learning would go a long way toward sorting this out, but it doesn’t.

Word: any sufficiently advanced stupidity is indistinguishable from malice.