Prompted by RCP’s battery misadventure, I replaced a handful of the Forester’s incandescent bulbs:

Despite what look like “squeeze here” markings, you must push the license plate bulb holders toward the center of the car:

They were both stuck firmly to the trim plate, so I braced a screwdriver against the outboard edge of the trim panel, after which it becomes obvious how pressing inward compresses the (plastic) spring clip so you can pull the outward side of the holder away from the hatch.

Casual searching turned up a bunch of exceedingly helpful advice for anyone DIY-ing through a Forester.

The bulbs with conical ends, known as “festoon” lamps, (unsurprisingly) come in  several lengths. The Forester bulbs are about 25 mm long, (unsurprisingly) much shorter than the 31 mm LEDs that seem to be the smallest available replacements, but (surprisingly) the socket tabs have barely enough compliance for the extra half dozen millimeters: 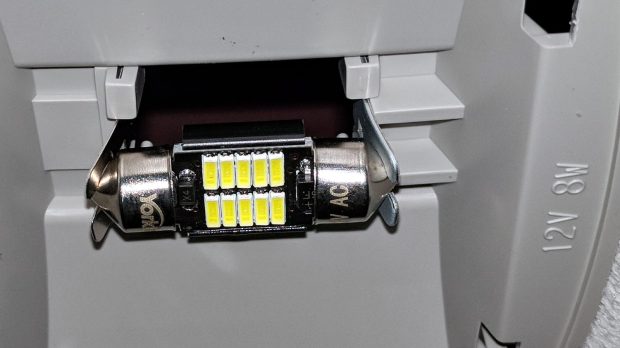 The LEDs are much much much brighter than the incandescents, although I’d prefer warm white to cool white. The cargo compartment lamp in the back is still way too dim; I don’t understand how Subaru decided on a plastic cover tinted tinted dark smoke gray.

All in all, a worthwhile upgrade!

I wonder how long they’ll last? I have one spare of each type …