The objective is to capture screen shots from the HP 8591 spectrum analyzer, now connected to Serial Port 2 of the Sena PS410 serial server.

My analyzer is an old one with a 3322A serial number, so its Opt 023 came with a genuine DB-25 female connector, not the DE-9 male connector described in the HP doc for the later Op 043 hardware. With that in mind, the HP doc says the spectrum analyzer supports only hardware handshaking:

The manual enumerates the handshaking lines:

Furthermore, it is written:

The spectrum analyzer sets the DTR line (PC CTS) false when its input buffer is full.

They offer several wiring diagrams, none of which correspond to the hardware on my bench, but swapping the “Personal Computer” and “Analyzer” headings on this diagram seems close to reality:

On the other end of the cable, the PS410 does “hardware flow control using RTS/CTS”. They also offer a diagram:

So I rewired the cable thusly: 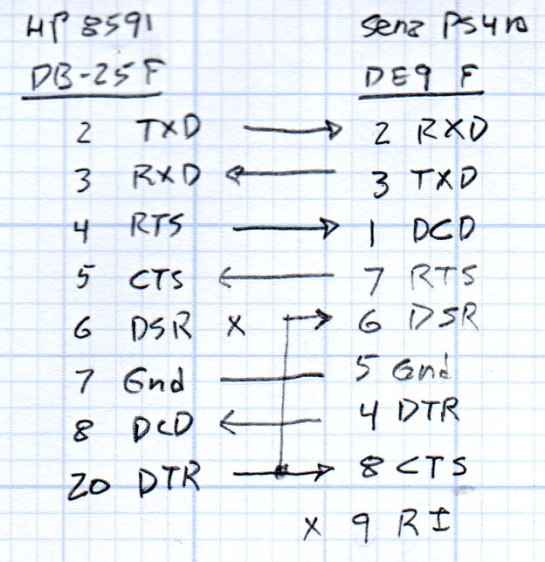 Pin 1 on the 8591 interface connects to both frame ground and signal ground and, back when I first made this cable, many years ago, I had wired it to the shield of the cable and thence to the DE9 shell. Alas, the PS410 took offense; for reasons I don’t understand, a shell-to-ground connection ignites a ferrite bead on the PS410’s PCB.

With the rewired cable in hand, the PS410 serial port setup looks like this:

The PS410 apparently wiggles its RTS output after every byte it receives, because the CTS input at the 8591 turns into a blur during screen captures. This seems unaffected by the Inter character time-out setting and doesn’t (seem to) produce any problems, so it’s like that and that’s the way it is.

I tried 19200 b/s and got mysterious errors that resemble overruns, which suggests the 8591 ignores the PS410’s flickering RTS output. The screen dumps require only a few seconds, so it’s not a big deal, although timing issues have a way of resurfacing at the most inopportune, uh, times.

Kermit knows how to handle network sockets and suchlike, so aiming it at the spectrum analyzer is a one-liner:

It’s not obvious set modem none does anything in this context, but it seems reasonable.

Then the rest of the script Just Works:

Which is the peak-hold spectrum of a local FM station, as received through an amateur radio HT rubber duck antenna.

The Kermit source code as a GitHub Gist: