The first batch of 25 resonators:

The second batch from the same eBay source arrived a few months later and I finally got around to measuring them:

A dot of green Sharpie on the AT26 cans identifies the second batch:

The alert reader will notice an un-measured 25th resonator at the bottom of the first batch. I dropped one from the second batch under the Electronics Workbench, found it, then also found its long-missing brother; now I have a genuine it’s-never-been-used resonator, just in case the need arises.

A quick-and-dirty simulation shows the series and parallel resonant peaks come out close, but not dead on, the actual measurements:

The model obviously doesn’t exactly match reality, which isn’t too surprising. However, I don’t understand something about tuning fork resonators, because the parallel resonance shouldn’t shift upward with the series resonant peak when the circuit gains a 24 pF series capacitance: 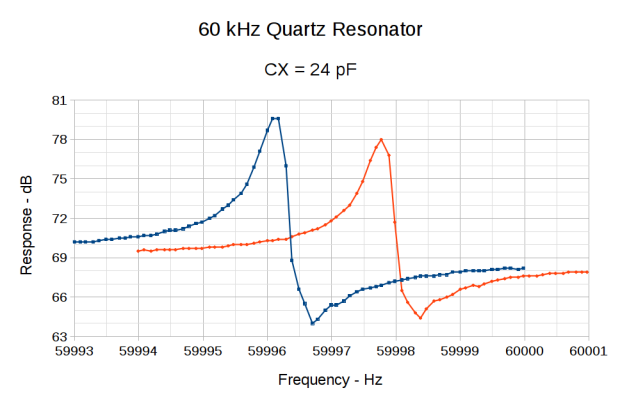 Suffice it to say that doesn’t happen with the simulation.

More study is needed, as the saying goes.