Posted by Ed in Electronics Workbench, Recumbent Bicycling, Science on 2017-04-27

With an AAA-to-AA adapter in hand, the Eneloop AAA cells looked like this:

The glitch comes from a not-quite-seated cell, showing that a poor connection matters.

A full charge made them happier:

The as-delivered 530 mA·h capacity represents 73% of the 725 mA·h after the first charge, so I suppose they’re more-or-less within the “Maintains up to 70% charge after 10 years of storage” claim. The 16-10 date code suggests they’re hot off the factory charger, so they must ship with somewhat less than a full charge.

Comparing the capacity in W·h makes more sense, because most devices (other than the Planet Bike blinky light these will go into, of course) use a boost converter to get a fixed voltage from the declining terminal voltage.

They arrived bearing just over 600 mW·h: 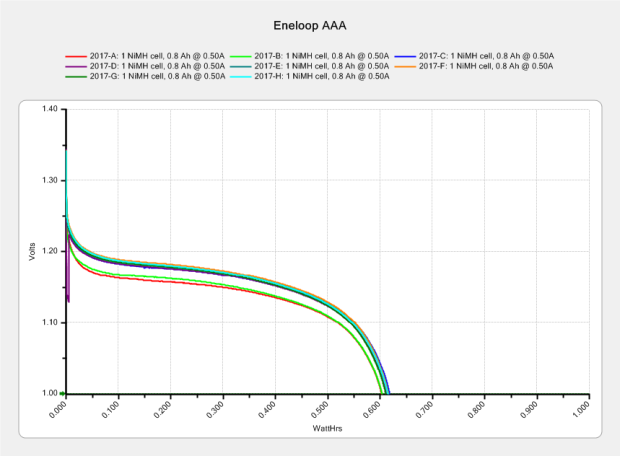 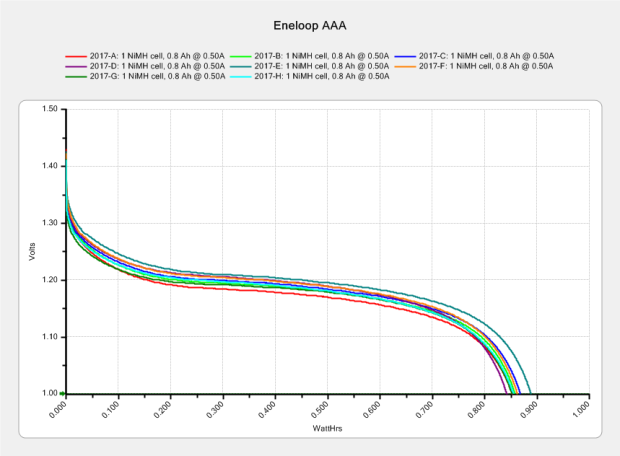 Call it 71% of full capacity on arrival. Close enough.

The Planet Bike blinky will be somewhat dimmer with two NiMH cells delivering 2.3-ish V, compared with the initial 3-ish V from a pair of alkaline cells. I generally burn the alkalines down to 1.1 V apiece, so perhaps they’ll be Good Enough.

Now, if I were gutsy, I’d install a rechargeable lithium AAA cell, with a dummy pass-through adapter in the other cell socket, and run the blinky at 3.7 V. At least for a few moments, anyhow …