Posted by Ed in Aphorisms, Electronics Workbench, Oddities on 2016-07-28

I’ve always wondered how noisy those Arduino + fake Neopixel lamps might be and these RF sniffers might come in handy: 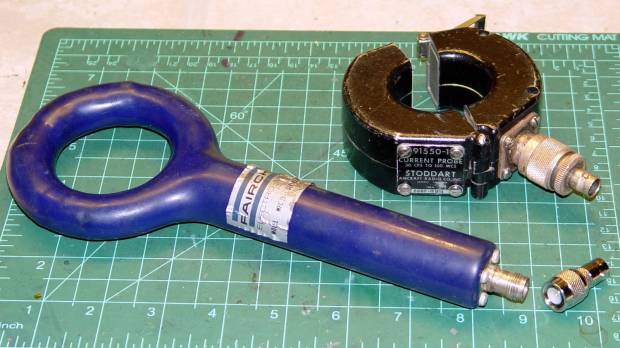 Even though they’re long obsolete, RF fields haven’t changed much in the intervening decades.

Fairchild Electronics may have become Electro-Metrics before they vanished in turn; the single useful search result offers a limited spec sheet that describes it as part of a set of three “loop probes covering the frequency range 10kHz-230MHz designed to search for RF magnetic leaks, especially in cabinets and shielded enclosures”. This one, with the blue coating, has a bandwidth of 22 MHz to 230 MHz. It has a TNC connector that now sports a cheap BNC adapter; note that it has standard polarity, not the reverse polarity required by FCC regulations that don’t take Amazon Prime into consideration.

Stoddard Aircraft Radio Co, Inc passed the 91550-1 baton to ETS-Lindgren, which (as of right now, anyway) offers a datasheet for a gadget that looks remarkably similar. The 30 Hz lower limit on the data plate suggests it’s roughly equivalent to ETS-L’s contemporary 20 Hz 91550-1L probe, but I doubt that makes much practical difference for my simple needs. The adapter takes the probe’s N connector to BNC.