As part of setting the Makergear M2 up after The Great Cleanout, I ran off a set of thinwall calibration squares that showed the left rear corner was high by 0.12 mm: the square in that corner measured 2.88 mm, rather than the intended 3.0 mm. The walls were 0.43 mm, about 10% above the nominal 0.40 mm.

That’s similar in both absolute values and alignment to the measurements from two months back.

I tightened the rear platform screw by a bit under 1/12 turn, less than half a flat on the hex nut, and dialed the Extrusion Multiplier back by 10%. The next set of squares, set up for walls made of three parallel threads, came out with heights within 0.08 mm of each other and 1.15 mm thick (rather than the nominal 1.20 mm).

They’re 40 mm on a side, mostly to produce bigger handouts for the next show-n-tell:

Letting it sit for a few days and running the same G-Code produced heights within 0.07 mm and wall thickness at 1.18, which I defined to be Good Enough.

Recent versions of Slic3r have been adjusting the various thread widths on the fly, as I’ve let everything except the basic extrusion width go with the default values. As a result, setting the wall width to 2 threads (0.80 mm) can produce an extremely thin third thread between the two perimeter threads that doesn’t extrude well. Making the wall three threads wide works much better:

The slicing algorithms may be smart enough to make all the tricks I’ve learned completely obsolete; that’s fine with me! 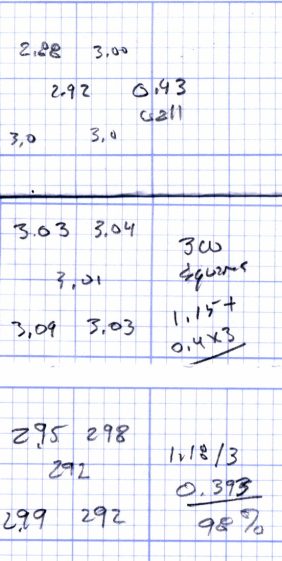