Replacing the original Noval socket in the string with the platter-friendly version, bracing the wiring with duct tape, balancing it on my desk, and firing it up: 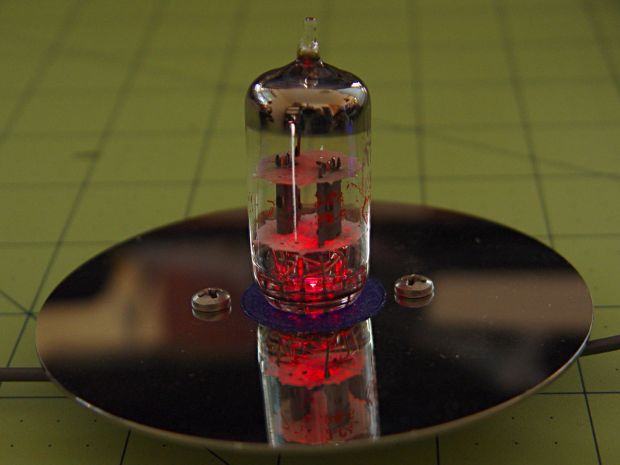 The green phase looks nice, too:

Those screws are too big.

The getter flash covers the entire top of the tube; shining an LED down through the evacuation tip won’t work and even a laser doesn’t do much. That saves me the trouble of trying to create a cap that doesn’t wreck the tube’s good looks.

I originally planned to use white / natural PETG for the socket, but the more I see of those things, the more I think black is the new white. The sockets should vanish into the background, to let the tubes (and their reflections) carry the show.

The (yet to be designed) base must vanish under the platter edge, too, which puts a real crimp on its overall height. I’m not sure how to fit an Arduino Pro Mini and an FTDI board beside the existing socket; perhaps this calls for a unified socket-base design held on by those screws, rather than a separate socket inside a base enclosure.

Even though I know the tubes are inert and cool, I still hesitate before removing them from their sockets with the Neopixels running: you simply do not unplug a hot, powered device!