We recently watched a gray squirrel drag a completely limp and unresponsive companion across the driveway, stopping every few yards to rest. We often see pairs of squirrels frisking / chasing / tussling in the yard, but this was something new.

After 100 feet of dragging, with pauses every few yards, the squirrel had hauled her companion to the fence at the far side of the yard. I leaped to the conclusion that the limp squirrel was dead:

But, after perhaps a minute, the “dead” squirrel gradually awoke and both critters slowly clambered up the fence. The squirrel on the right had been doing the dragging and is unquestionably female, the one on the left is much smaller and likely a new pup: 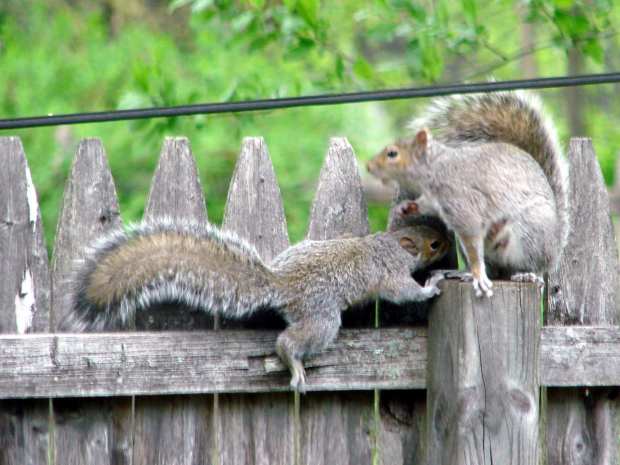 So apparently the mother squirrel had hauled one of her pups away from something. Perhaps it was stunned after falling out of a tree or the sole survivor of a hawk attack? We’ll never know The Rest of The Story.

Forgive the anthropomorphism, but if this isn’t motherly love & comfort, then give me another word for it:

Taken through two layers of wavy 1955 window glass with the Sony DSC-H5.