Posted by Ed in Electronics Workbench, Photography & Images, Science on 2014-02-26

When our Larval Engineer repaired the Casio EX-Z850 camera’s buttons, we noticed that the memory backup battery was on its last legs: 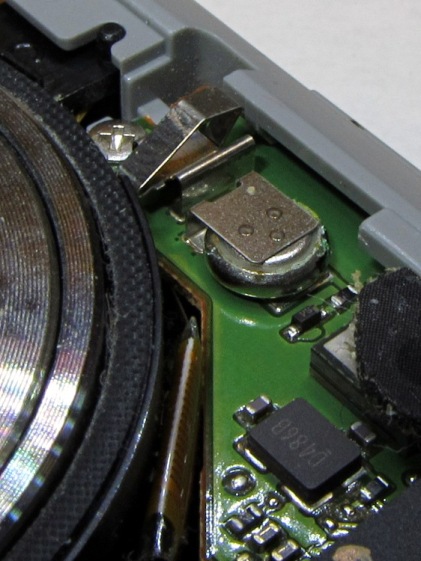 The camera has returned home, where I’ll put it to good use on the microscope, but I’m the type of guy who swaps batteries every now and again, soooo that needs fixing. Wikipedia says the battery isn’t replaceable, but you can’t believe everything you read on Wikipedia, right?

Removing the camera’s front cover (stick the screws to a length of masking tape!) reveals the backup battery hasn’t magically healed itself:

The main battery applies 3.2 V with the top terminal negative; it’s marked to help me remember that fact.

I snipped both legs of the top contact bracket, which promptly fell off, and then pushed the battery off its bottom contact. The condition of those two pads suggests a pair of cold solder joints (clicky for more dots):

I wanted to replace it with a polyacene supercap, but there’s just not enough room in there. The biggest cap that fit was a 33 μF 16 V SMD electrolytic cap, so I soldered one in place:

I had to flip the camera around to get the soldering iron in between the cap and what looks to be an intrusion monitoring switch just to its left. No lie, that shiny metal thing seems to be a tab that presses against the front cover; it could be a static discharge / grounding point, but the base looks more complex than that.

Now, a capacitor isn’t a battery, but memory backup doesn’t require much of a battery, either. I guesstimated the memory (or whatever) would draw a few microamps, at most, giving me a few seconds, at least, to swap batteries. A quick measurement shows that I’ll have plenty of time:

The camera started up fine after that adventure, so the memory stays valid with the backup voltage down around 1 V.

So, at least at room temperature, the memory draws less than a microamp.

I love it when a plan comes together!

With any luck, that capacitor should outlast the rest of the camera. It’ll definitely outlast a lithium battery, even if I could find one to fit in that spot.

I did those measurements by sampling the capacitor, rather than holding the meter probes in place, because the 300 nA of current drawn by a 10 MΩ input resistance would cause a pretty large measurement error…