The Nike cycling shoes I bought some years ago (at a steep discount when they got out of the cycling shoe biz) close with a ratcheting plastic strap rather than laces, so I bought a spare set of straps: the plastic part always breaks first. As it turned out, a coil spring inside each latch failed and the stub end (on the right side here) gradually worked its way between the latch tab and the frame: 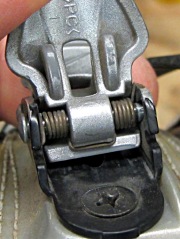 Eventually this got to the point where the latches jammed and I had to do something. The first step was to drill out the rivet holding the spring and tab in place:

You’ll note the rich collection of swarf clinging to the drill bit, which indicates this one hasn’t been used since a lightning strike magnetized all the steel in the house. A pass through that demagnetizer shook off the swarf and prepared the bit for the next time.

Releasing all the parts shows the problem:

The OEM springs used 24 mil spring wire that, surprisingly, matched a box of music wire in the Basement Laboratory Warehouse Wing. The spring coils have 5 turns that just clear the 3 mm rivet that I recycled as a mandrel; I think a 2.5 mm pin would produce a better fit. Not being a fan of rivets, I replaced them with 4-40 machine screws, even though the threads probably won’t do the aluminum frame any good at all.

A protracted bending and wrapping session produced a reasonable approximation of the OEM spring:

Trimming and shaping the ends to fit through the notches and around the outside of the frame shows that my wire-bending skills need considerably more practice. This spring (the second one I made) also shows that my beginner’s luck with the first coils wore off all too quickly:

But both springs fit and work fine, so I’ll call it done for now:

Will a replacement spring break before the plastic strap?