We recently attended an evening presentation at the Vassar College Ecological Preserve about their Northern Saw-Whet Owl (aka NSWO) research program. You can read more about both that and the owls elsewhere on the Intertubes, but I was impressed by the owl handling process.

NSWOs arrive from the mist net (the location of which the researchers do not describe in any detail, for obvious reasons) in a bulk carrier made of small tin cans strapped together with duct tape:

Another container holds the Owl Under Test while being weighed:

Saw-whet owl in can

They express their obvious displeasure at this treatment by clacking their beaks (“KLOK! KLOK!”) and, if given the slightest opportunity, latching onto a finger: 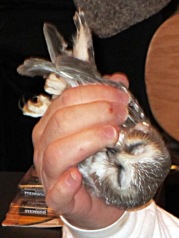 Their claws will give you a nasty puncture wound or eight in a heartbeat; note how their feet remain carefully captured at all times. Despite that, the researchers sported many hand scars. FWIW, the owls are murder on mice and other critters, but evidently look a lot like lunch to larger owls and hawks.

NSWOs obey the general rule that anything with ears enjoys being scratched behind them. It may be reflex, rather than true bliss, but it works:

After weighing, measuring, blood-sampling, and stroking, the handler takes each owl outdoors, gives it a minute to reset its eyes for night flight, and releases it.