While putting the HBP back together and stuffing it into the Thing-O-Matic, I did some weighing and measuring with the intent of finally putting numbers on the required motor torques.

The X stage weighs 114 g without the HBP heater and hardware. The aluminum build plates weigh 100 g each.

The individual rods slide back and forth in their bearings with essentially no force at all; it’s less than the resolution of my pull scale. Call it 1 ounce = 0.3 N = 30 g.

After aligning the rods, I popped the X-stage HBP back in the Y stage, where I discovered I’d adapted the holes to suit the very-much-misaligned ABP’s rods. A bit of sanding freed up things up, but the final result was disappointing: sliding the X stage required about 0.75 pounds = 3.3 N = 340 g from my pull scale. Those rods remain over-constrained despite my best efforts.

The pull scale required less than 2 ounces = 0.6 N = 60 g to haul the Y stage back and forth after it was back in the Thing-O-Matic, so those ball bearings on the left-hand rod work really well. I must doodle up something similar for the X stage, for sure!

With the belts tensioned and the motors unplugged from the drivers, both the X and Y stages require about 2 pounds = 9 N = 0.9 kg of force to move. Those numbers depend strongly on belt tension, to the extent that the tension ought to be a measured quantity. The Y stage has some stiction that I guesstimate around 1.5 kg, but that’s not a reliable number.

Moving a well-adjusted X stage requires 5 times more force than the Y stage. What it’s like for a built-as-shipped X stage boggles the mind.

This torque-speed curve from the Kysan product information page for the 1123029 (aka 42BYG034-4.78) motor used in Cupcakes and Thing-O-Matics shows that the pull-in torque starts at 14 mN·m and goes downhill from there, as is customary for stepper motors: 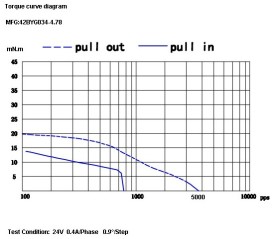 In a Thing-O-Matic, the motor windings sport a 35 ohm resistance and are driven from a 12 V power supply. Ignoring voltage drops in wiring, current-sense resistors, and driver transistors, you cannot push more than 340 mA = 12 V / 35 Ω into the winding. The current is likely around 300 mA, after taking all those factors into account.

The REF pot on the stepper driver board has no magic properties. If the REF voltage is higher than about 0.6 V = 300 mA, then the driver can’t regulate the current. Increasing REF simply eliminates the microsteps around the current peaks: their reduced current values remain higher than the maximum possible motor current.

By and large, the X and Y motors run in L/R mode with no microstepping; that horrible sound you hear is the motors screaming in agony. All of the touted advantage of microstepping do not apply to these motors and drivers under these conditions.

Motor torque is roughly proportional to winding current, so the actual pull-in torque would be at most 3/4 of the amount shown in the graph: call it 10 mN·m.

No wonder those poor motors lose steps at the slightest provocation!

The motor’s rated holding torque is 240 mN·m, which derates to 180 mN·m at 300 mA. If the motor runs slowly enough, it can drag the stage along step-by-step.

At 100 rev/min, the lowest speed on the torque-speed graph, the stage moves at:

I’ve been running my Thing-O-Matic at 40-50 mm/s, but that’s about the upper limit even after a whole bunch of careful adjustments. Now I understand why: these are the wrong motors for the job.

The motors operate at the ragged edge of their performance ratings even while moving at conservative feed rates. They probably produce more torque than their ratings, which is the only reason they work as well as they do. They’re certainly not suited for speeds over 50 mm/s, even if some folks have gotten them running up there; I could jog them at 70 mm/s with marginal reliability.

In addition, the very high winding resistance dissipates a tremendous amount of power that doesn’t contribute to turning the rotor: 3.2 W = (300 mA)2 × 35 Ω in each winding, . That’s derated very slightly by the few active microsteps, but it still makes for a rather toasty motor.

[Update: More brain fade. The motor max power spec equals a single winding at rated current times rated voltage. Derate the current in multiple windings so the total does not exceed that power.]

What’s needed is a NEMA 17 motor with decent pull-in torque, a few ohms of resistance per coil, and maybe a 1 A rating. Sort of like the one I’m using on the geared stepper extruder…