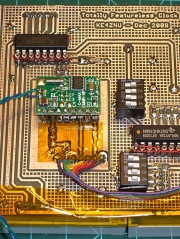 The little C-Max CMMR-6P-60 WWVB receiver board is somewhat sensitive to its surroundings: putting it too close to fast-switching digital signals is a Bad Idea. Of course, when there’s an antenna connected to the thing, it’s hard to separate the effects, but I’ve been testing reception with the antenna at the end of a two-foot twisted pair: far enough away to eliminate most problems.

Just to see what happens, I built a little shield enclosure around the receiver board. The clock board has a pair of solid planes isolated from everything else, with a header matching the receiver’s pinout, for this very purpose. The receiver has a fairly solid ground plane on the bottom, but it’s quite sensitive being snuggled up against other objects; the header holds it about 5 mm above the circuit board.

The dark amber square is Kapton tape across the traces. If I ever do this again, I’ll put the traces on the bottom so the board is entirely shielded and the tape isn’t needed.

Shield soldered to base

Some 1-inch copper tape with adhesive on one side serves as the shield enclosure, with a layer of Kapton tape covering all but about 2 mm of the adhesive near the bottom to insulate the copper from the receiver. Bent those 2 mm strips outward, with the adhesive on the bottom, stuck it to the shield plane, and soldered it in place at the corners.

The antenna leads poke out through one side; it’s not very elegant, but I think it’s about as good as is needed for this sort of thing.

I cut the tape at the corners and folded it down to make a little box, stuck a square of copper tape over the top flaps, soldered the corners, and it’s cute. Admittedly, it doesn’t have perfect conduction around the joints; the next time it’s on the bench I’ll add a few solder dots at the midpoints. 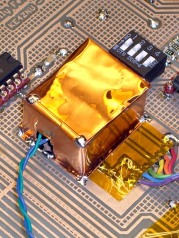 The immediate effect was to raise the receiver’s Glitchiness score by a factor of about four. However, that’s not entirely a bad thing; it turns out that the reciever is much less Glitchy when it’s subject to high noise levels: the receiver AGC cranks the gain down so low that only heroic pulses get through and the number of glitches drops dramatically.

As nearly as I can tell, when there’s no WWVB signal, as during the day, a low Glitchiness count means there’s extremely high noise. Thus, a higher count means less noise and better sensitivity.