I managed to jam the 3-jaw chuck on my lathe by turning the lathe on without the formality of snugging the chuck against the spindle first; IIRC, there was maybe 1/8″ clearance. The resounding thunk when the irresistible force hit the immovable object was the prelude to about a year of increasingly desperate attempts to remove the chuck, punctuated by long periods of despair.

The absurd derring-do with clamping the 4-jaw Sherline chuck in the 3-jaw lathe chuck described there finally prompted me to ask my buddy Eks for advice, which is what I should have done in the first place. He suggested removing the chuck body from its backplate, building a lever that bolted to the backplate with the same six bolts as the chuck, blocking the spindle with wedges under the belt pulley, and wailing on the lever with a lead hammer.

We wondered if a hard hammer would be better than the lead hammer, perhaps because the impact would be less squishy, but that was in the nature of fine tuning.

The key idea is that removing the chuck body also removes a tremendous amount of rotational inertia, so that wailing on the lever arm actually transfers force / impact directly to the backplate, rather than trying to spin the body. The somewhat risky part is that there’s a pin connecting the spindle with the drive pulley (it’s disengaged when using the back gears), so that it’s entirely possible to break the pin rather than unstick the chuck. But it was still a better idea than any I’d had so far.

Making note of the witness marks on the backplate and chuck body, I removed the body. Fortunately, there was just enough clearance between the front bearing journal and the backplate that I could get the bolts out without dismantling anything else.

That left me with the rather grody and still firmly stuck backplate. The bolt disk was brazed onto the threaded cylinder with a keyway. Although the chuck body had a key slot, it looks like the matching key had been machined off of the cylinder, so the bolts were taking all the cutting torque. Worked OK for both the previous owner and for me, so I suspect it’ll continue to work just fine for the next owner, too. 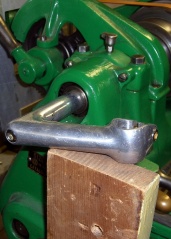 Peering through the spindle reminded me of some recent bike repairs and it occurred to me that maybe, just maybe, a old-skool split-wedge handlebar stem would get enough traction inside the spindle to hold it in place. Some rummaging in the Bike Junk box produced just such a stem and it fit exactly into the spindle bore. Now the spindle is fixed in place by its ID and there’s no risk of breaking the locking pin or (shudder) the back gear.

Even better, the lumber pile emitted a chunk of 1×4 (actual dimensions!) wood that was precisely the correct length to reach from the floor to the stem. I like it when projects work like that; finding exactly the right stuff in the pile is sort of an omen that things are going well.

Fundamental rule: always start with a hunk of something that looks a lot like what you want to end up with.

Corollary: ya gotta have stuff!

Some rummaging in the parts heap turned up several feet of nice “angle iron”, so I bandsawed off a hunk. I should have realized something was wrong when a foot of teeth stripped right off the saw blade, but I ascribed that to, oh, maybe weakening a few teeth when I soldered up the blade.

I had our daughter run the trig to generate coordinates for the six holes, then lay out the center bore and bolt holes on the plate for practice. Drilling the first hole prompted me to resharpen the drill, but poking the remaining five holes into that plate produced vast clouds of wood smoke from the sacrificial plate underneath, despite boiling copious quantities of cutting fluid off the top.

I finally admitted defeat when the “angle iron” rubbed the teeth right off a 2-inch hole saw.

As nearly as I can tell, that plate is un-machinable stainless steel, hand-forged by the Devil himself specifically to taunt me, and is good for nothing. Obviously, I hadn’t used it for anything in the years it had been in my pile and, perhaps as an omen, it didn’t have any other holes in it from anybody else’s efforts. I’ll keep the pieces around just to sneer at them; won’t get fooled again.

So, at this point, I am out a bandsaw blade, a drill bit, and a hole saw. We won’t discuss the circle cutter or my abortive attempt to lash the damn thing down to the Sherline and perform helix-milling upon it.

While licking my wounds, I wondered if the bolt circle on the backplate would provide enough lever arm to make any difference. I tightened a sacrificial bolt & nut with one face of the bolt aligned along a radius from the spindle center, then deployed a big drift punch and the two-pound ball-peen hammer (a.k.a., The BFH).

A half-dozen good shots later, the backplate spun free. Notice the very small gap between spindle and backplate… that’s all it takes!

I added a closed-cell foam washer to fill the gap between the backplate nose and the butt end of the chuck; there was a remarkable amount of crud built up in there.

It’s worth noting that the headstock has two honkin’ big bronze spindle bearings, no delicate balls, and a few mighty thwacks didn’t do them a bit of harm.